11 Things that Make Oaxaca so special 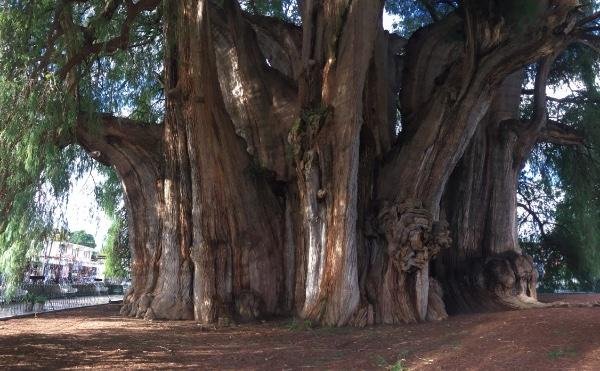 The “Arbol del Tule” is the huge Mexican cypress tree at Santa María del Tule, a pueblo about 14km east of Oaxaca. The Arbol del Tule is dated at over 2,000 years old, measures one hundred sixty-five feet in circumference, and is about 15 stories tall. Some say that El Tule may be the largest tree in all of Latin America.

Monte Alban served as the ancient capital of the Zapotecs between 500 B.C. and 800 A.D. At its peak, the city was inhabited by more than 40,000 residents. Today, visitors can tour the site; points of interest on the Grand Plaza include temples, palaces, human figures known as the “danzantes”, a ball court, an observatory, and tombs that once held gold, silver, jade, alabaster and turquoise treasures (now housed at the Centro Cultural de Santo Domingo in Oaxaca City).

This ancient site consists of 5 “ruin clusters”; archaeologists speculate that some of the ruins were used for ceremonial and religious purposes while others were palaces for the elite. Unique to Mitla are the greca (fret) decorations found on ruin walls.

A traditional Zapotec town located in the foothills of the Sierra Juarez Mountains, about a half hour outside of Oaxaca. Teotitlan is renown for its beautiful weavings, especially rugs.

Fantastical wood carvings first made by Pedro Linares in the 1930s, after he had a dream the creatures. Linares was from the town of Arrazola, which is now famous for the carvings made from the wood of the Copal tree.

The comparsa is a public theater in which people gather to dance, laugh about death and politics, and enjoy the musical rhythms inspired by Mezcal, aguardiente and other alcoholic beverages that open the gates of heaven and allow contact with the gods.

A drink of the gods, tejate gives you jump start while filling you up. The drink is made from cacao, rosa de cacao flowers (which are not the flowers of a cacao plant), corn, cinnamon, Mamey seed, and sometimes almonds. All of the items are marinated together and then frothed; the result is a chai-like cold drink with a foamy top.

Mainly a breakfast staple in Oaxaca, Tamales are made by combining masa (corn dough) and other ingredients (depending on the desire for a sweet or savory tamale), into a cornhusk or banana leaf and then steaming it all together.

A warm, sweet drink made from masa (corn dough) generally served with tamales or sweet bread. It can be flavored with chocolate, which is then called a champurrada or vanilla.

Mezcal, a traditional alcohol made from the sugary heart of the Maguey cactus. The heart is baked, pulverized, and then distilled, resulting in an almost smoky tequila. There is a common Oaxacan saying that illustrates just how central a role mezcal plays, “Por todo mal, mezcal, y para todo bien, tambien,” which roughly translates to, “Mezcal is for all the good times and the bad.”